Maria Palma speaks with Gloria Smith, who grew up in a small town in northern Nevada. At 81 years old, Smith reflects on how America used to be a nation of compassion and how it could be once again.

In her home in Southwest Reno, where she has lived for decades, Gloria Smith sits down at her desk in her spacious office, takes her handwritten notes and old family photographs, and begins to reminisce about the early years of her life. She was born on May 2, 1940, in the northern Nevada town of Elko to a family of nine siblings. She remembers that at that time, life was a little kinder and the values she grew up with were not the same as they are today.

“My parents naturally were God fearing people and … they loved the United States. They lived here their whole life,” she expresses.

She grew up in Mill Canyon, a small mining camp where her parents raised rabbits and chickens to provide food for the family.

She recalls going outside to play with the rabbits and that a bull snake got into the pen and swallowed one of the bunnies. “I went nuts. I started hollering ‘Dad, dad, you got to bring your knife. you got to get the baby out of the stomach.’ And he did, he opened up the snake and the baby was still alive.” 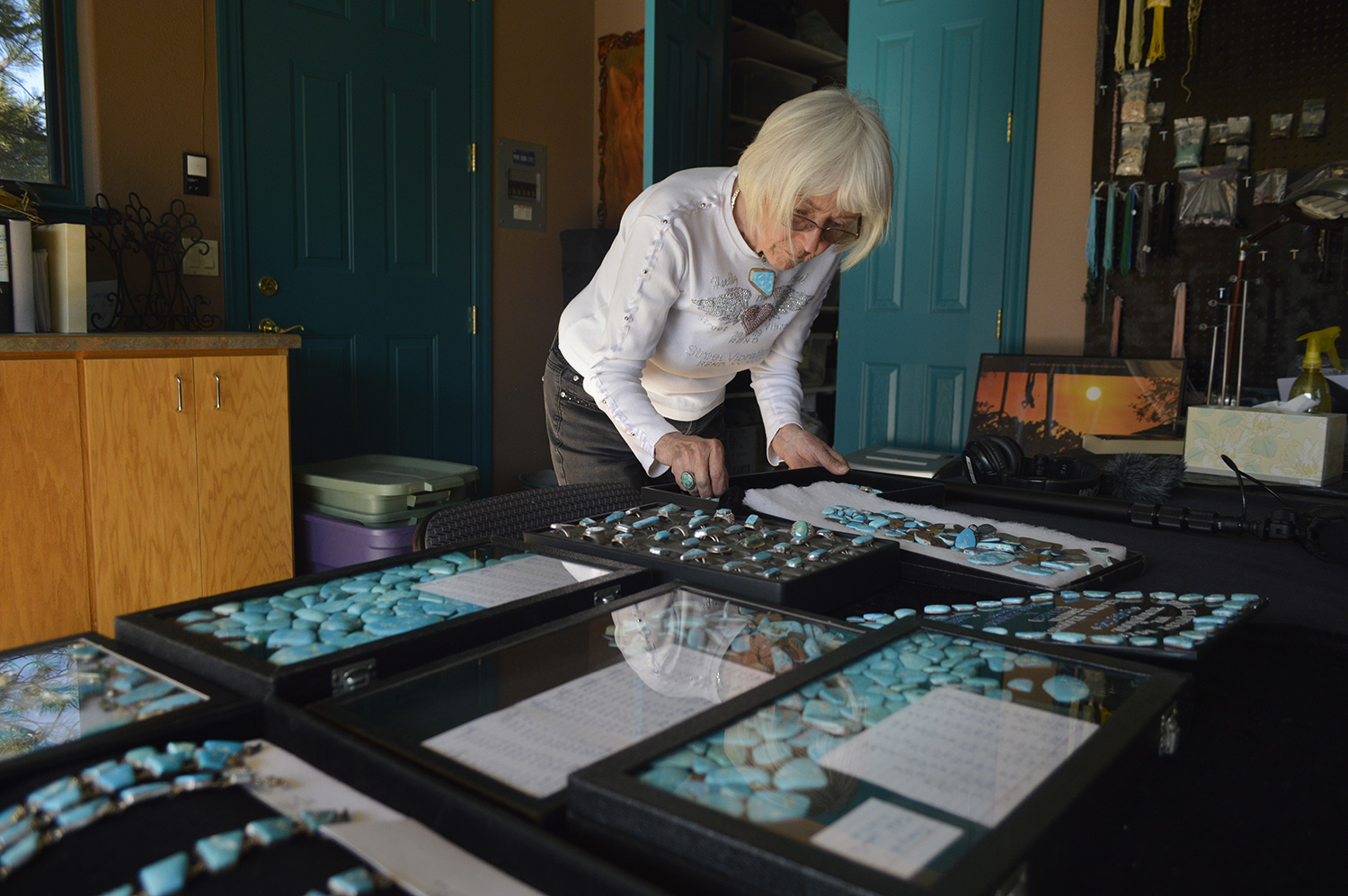 In her garage, Gloria keeps all types of jewelry made out of turquoise, like earrings, necklaces and rings. Today, the Blue Gem is considered extremely rare, valuable and collectible. (Photo by Maria Palma)

In the early 70s, Gloria’s father Kimball Elquist and brother Jim Elquist had the desire to mine something. They decided to start working in a mine located in the Copper Basin area southwest of Battle Mountain, where some time later, they would come across one of northern Nevada’s most prized gems. The Blue Gem Turquoise.

Gloria remembers that moment quite well. “My dad got the mineral rights to the turquoise in that mine area and it was underground. It was all done with pick and shovel.”

Her brother stockpiled turquoise when mining was shut down because the value of copper fell. Years later he started making jewelry with it.

“He also had a young gal helping him with his shows but she got killed in a car accident. And so I said ‘what are you going to do?’ He said, ‘I don’t know.’ I said, ‘Well, I can help you.’ So I started working with him.”

After that, Gloria took over the sales of the turquoise jewelry around different towns and places in Northern Nevada, like the Genoa Candy Dance in Minden and the National Cowboy Poetry Gathering in Elko.

Another thing Gloria is proud of is the non-profit foundation she has with her husband Dean that they started in 2004. They give scholarships to young people, mainly from rural areas of Nevada, so they can pursue their education. 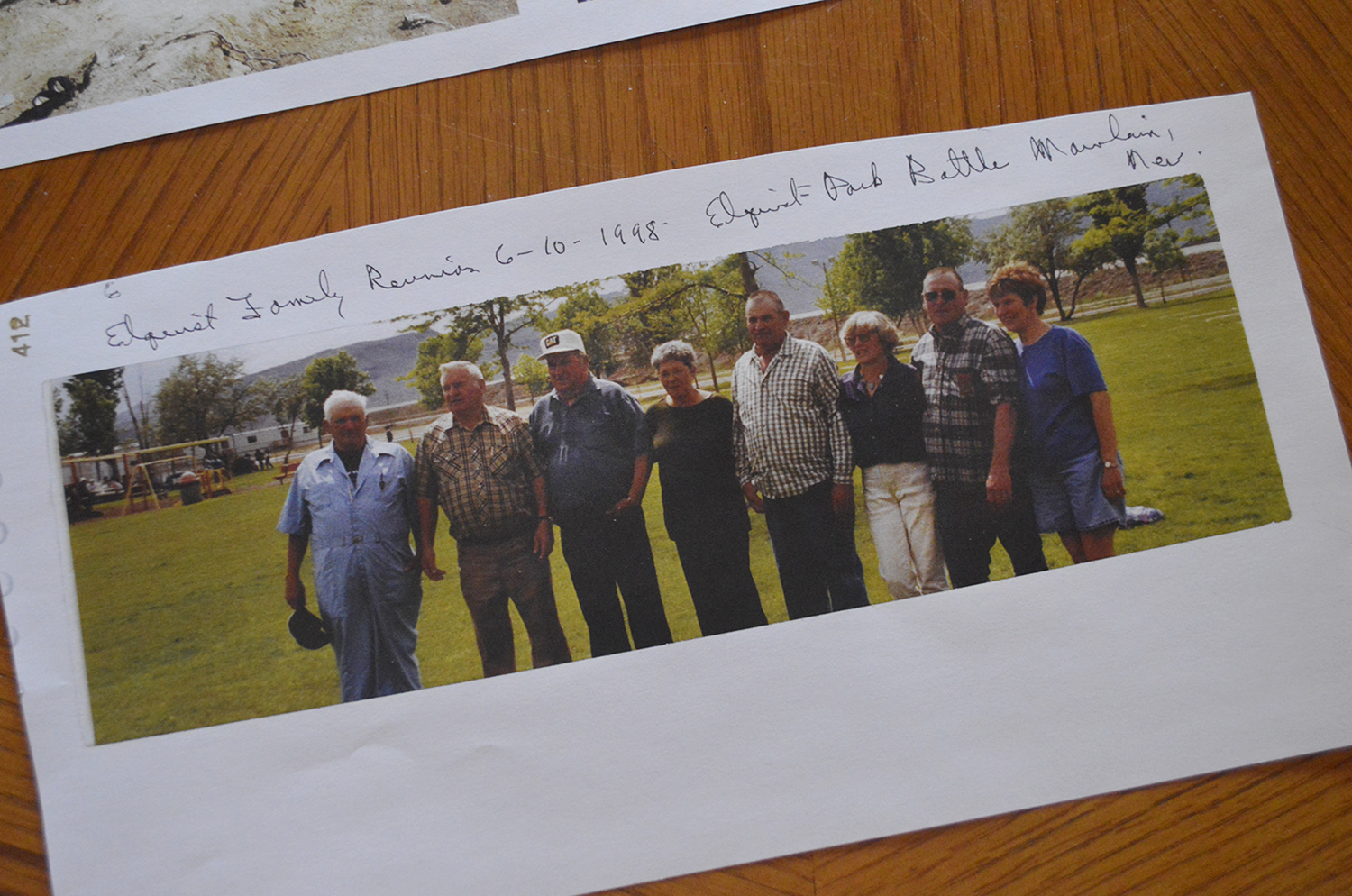 Gloria at the Elquist family reunion with her siblings in July, 1998. She grew up with six brothers and two sisters. (Photo courtesy of Gloria Smith) 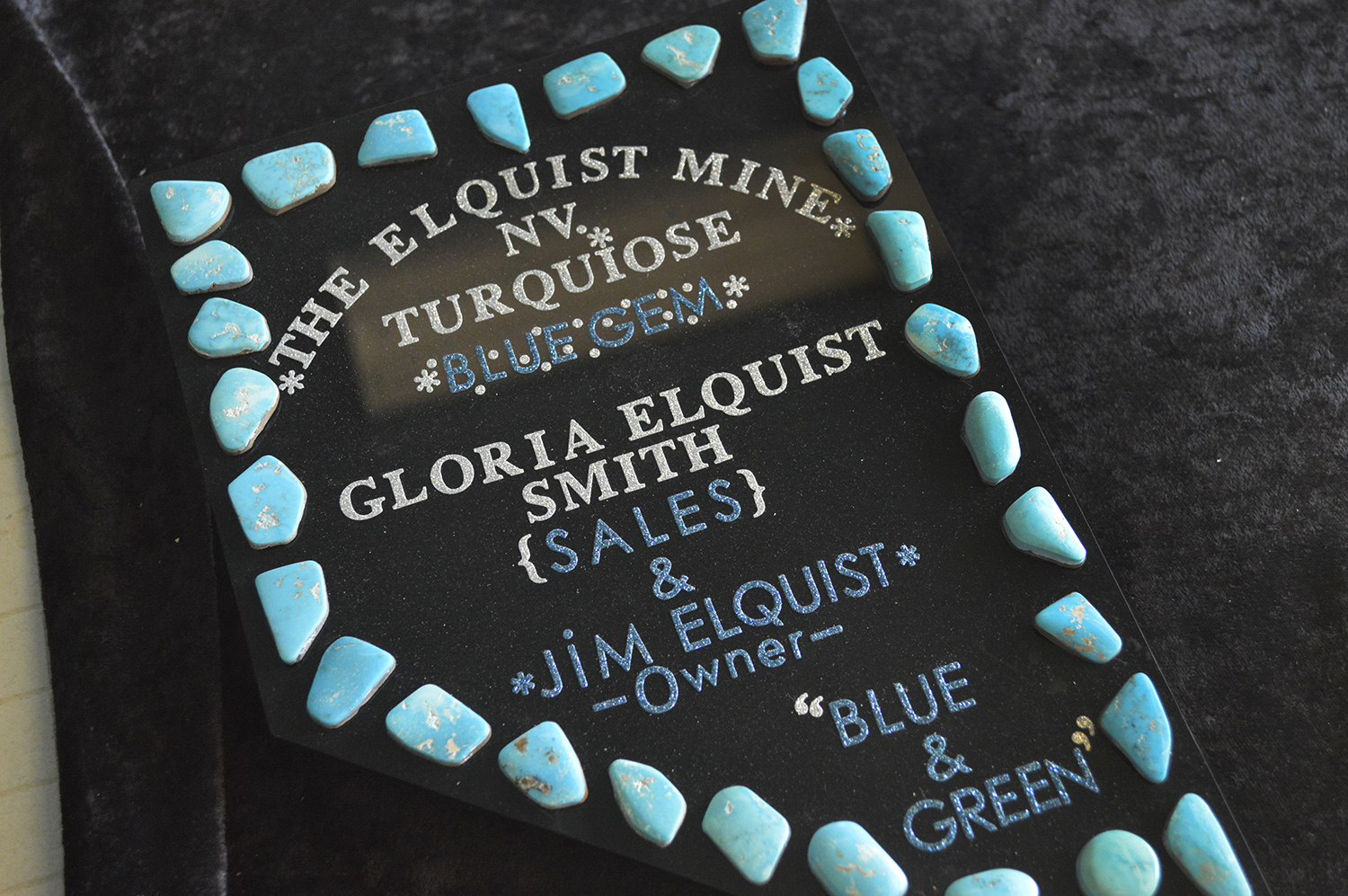 This is the plaque that Gloria has been using for her shows. She says she has received offers from people who wanted to buy all her jewelry but has declined. (Photo by Maria Palma) 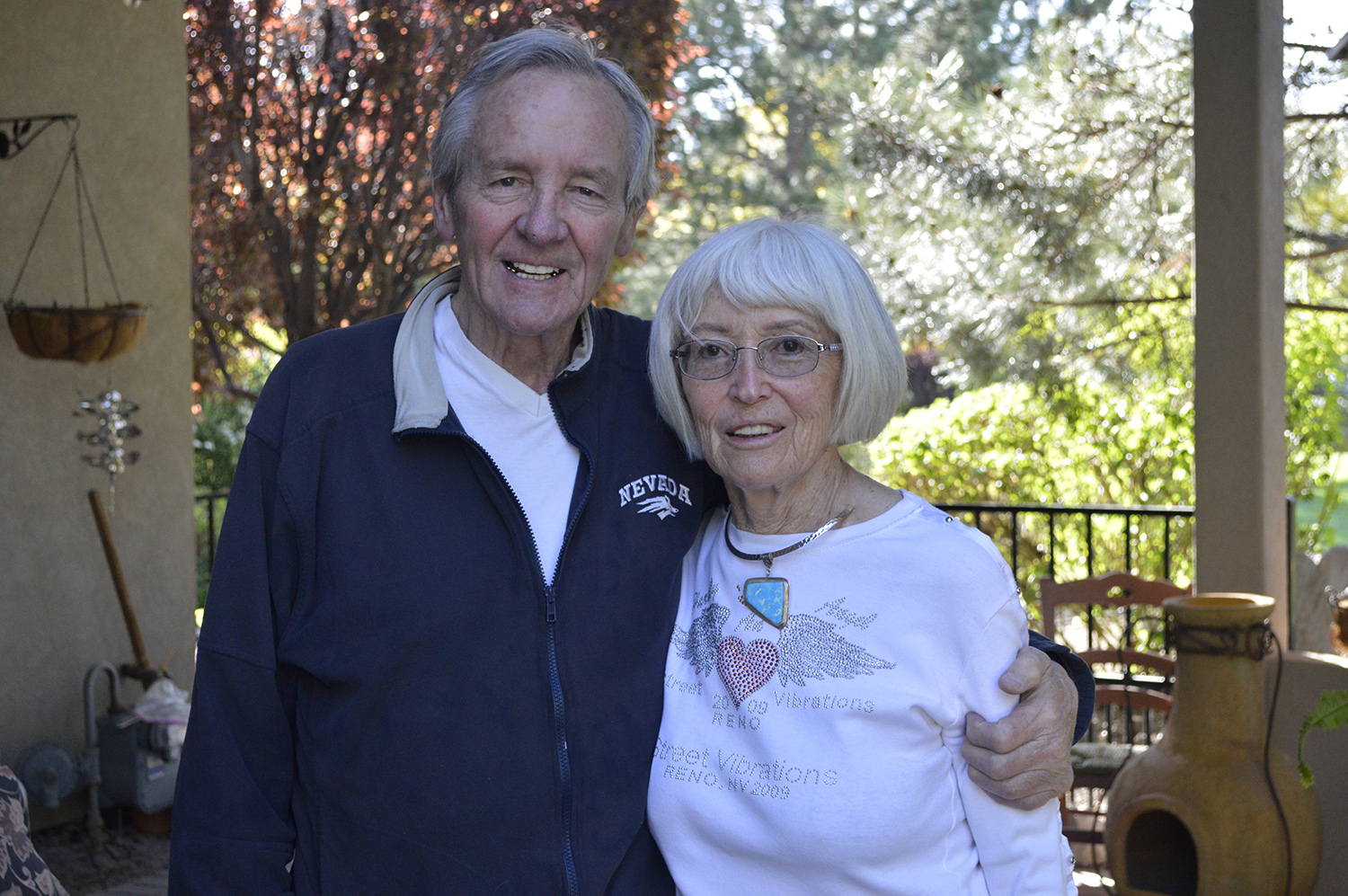 Dean and Gloria Smith got married in 1961. They have one daughter, Rachael and two grandchildren, Daniel and James. They all currently live in Reno. (Photo by Maria Palma)

In 1945, Gloria’s parents decided to move to Battle Mountain, Nevada, to get their children educated. There, she completed elementary school to later graduate from Sparks High School.

“I got a good education there and made a lot of friends…  we just had a real wholesome type of environment in a small town. They’re much better than the larger towns. And they could get to know students better and you get to know the teachers better and you all become a big family.”

Her upbringing is part of the reason she gives back to students from more rural areas than to students in urban locations.

“We get 15 or 20 applications and we go through and pick out the ones that we think qualify. And then we finish (paying for) their education. They’re real ambitious young people and I’m really proud of them,” she explains.

The turquoise lady, as many recognize her, has had an adventurous life, but none of it would have been possible without the hard work from her and Dean.

“My husband and I, we started from nothing. But we worked very hard for it and I feel good about what I did for it. I don’t mind working hard. It’s part of our heritage and it should be everybody’s heritage that lives in this country or any country.”

Even though Gloria loves her country enough to “go to war” and “fight for our democracy,” she said she gets depressed by the news because the American society is not how she remembers it.

If we could only get back to where people respect other people’s rights…” she said, the world would be a better place.

“What does it mean to me to be an American? It means everything in the world to me because I love America. It’s been my home for many, many years. And I would never leave and move somewhere else because it’s a wonderful country. We need to do some correcting with the political parties now and a few things. But overall, I can’t think of anywhere I’d rather live. And I’ve traveled a lot in the world.”

Gloria said she feels it’s important for mankind to love each other, no matter race, class or nationality.

“I don’t give a damn where they’re from, what color they are, you love them. Unless they do something really bad to you, then you don’t love them. And to me, that’s really important and to instill that in your children is important too. So I’m hoping they’re learning from that. And if they aren’t, then that’s their problem, because someday I’ll be gone and they’ll be on their own.” 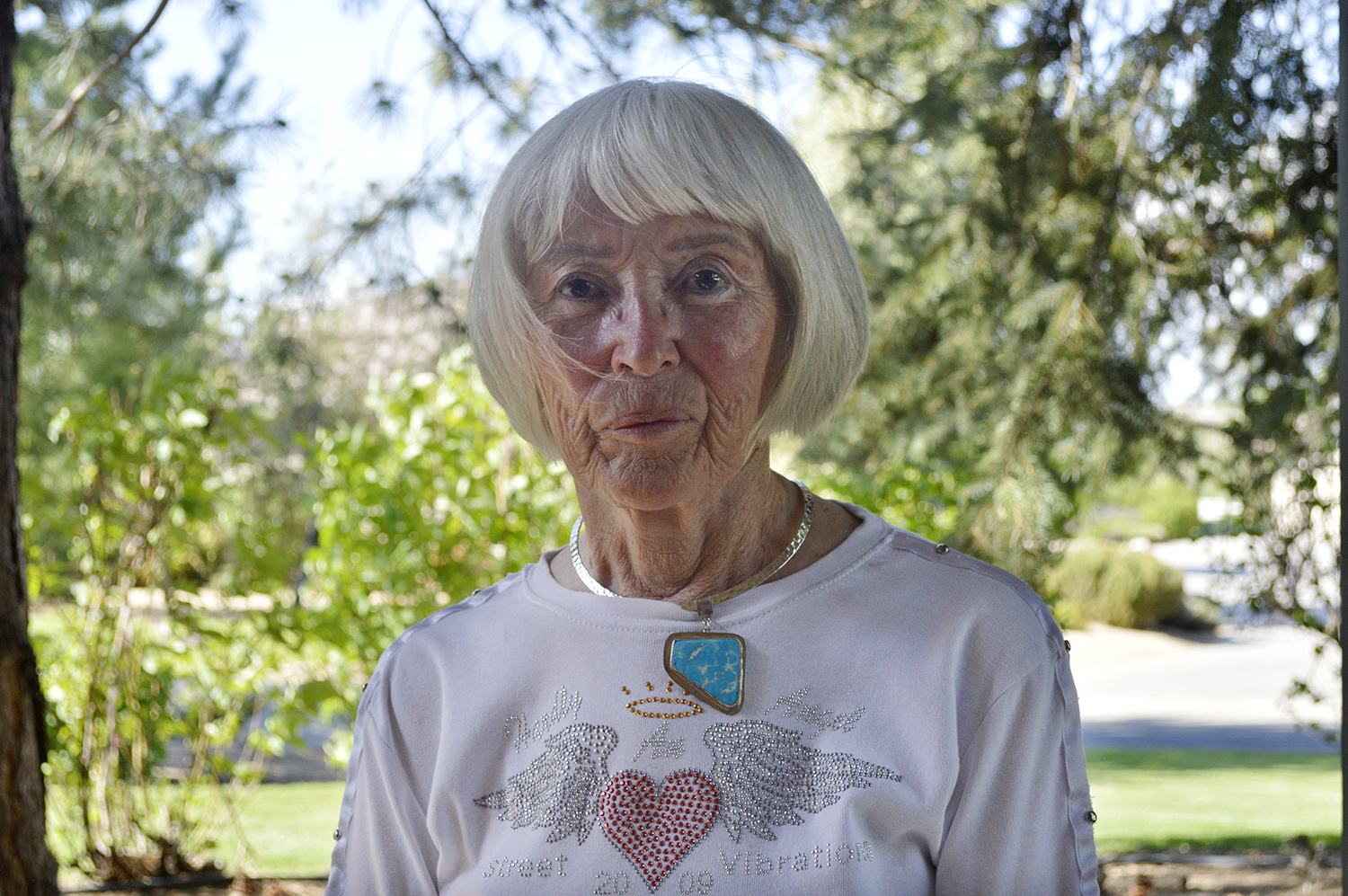 Gloria has had an adventurous life. She has hiked the Himalayas, traveled from Paris to Hong Kong and now, she enjoys being a homebody by gardening, doing pilates and drinking her favorite beers. (Photo by Maria Palma)